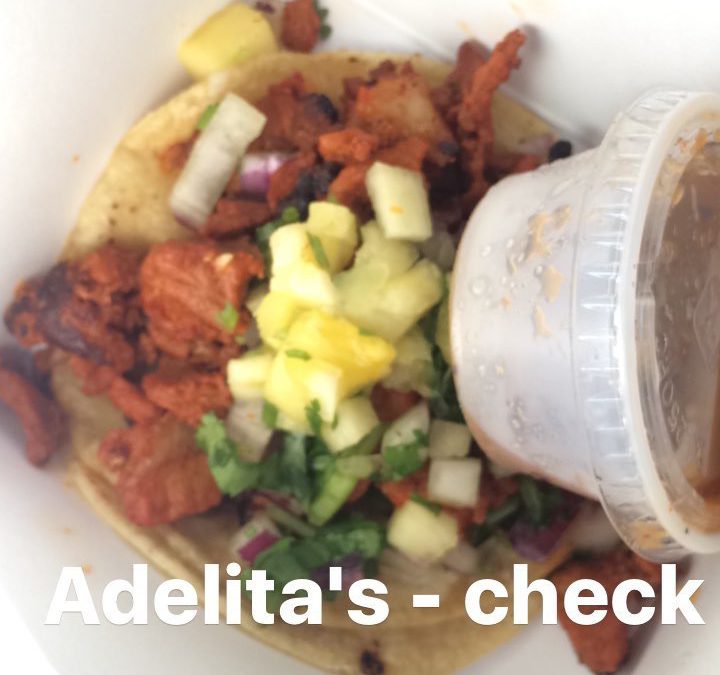 It seemed like a good idea at the time. When we saw #nationaltacoday trending, we knew we’d have to get tacos at some point – we just couldn’t agree on where to go. Denver is home to fantastic Mexican food wherever you go, and we were suffering from analysis paralysis – too many choices to make a decision. So, rather than wait around for a decision that would never come, I took off on a mission to gather tacos from 6 restaurants. Crisis averted.

Things got off to a rocky start. I had a GoPro on my dashboard with the intention of putting a video together when I returned. However, those plans were shot when the battery died before I reached my first destination and the 6-inch charging cable meant I couldn’t charge the camera and record anything but the inside of my car’s center console. Ah well, obstacles are there to be overcome. I wouldn’t let that setback ruin my mission.

Adelita’s was packed when I walked in. I was told that my takeout order of a single taco wouldn’t be ready for a half hour. Not wanting to waste time, I told them I’d be back to pick it up later and left for my second stop.

I called in my order as I drove to Uno Mas, and it was ready when I arrived. Located on Old Historic South Pearl Street, Uno Mas serves street tacos made with fresh, locally sourced ingredients. My stomach started growling at me as I set the takeout box on the passenger seat – I usually dig into these tacos before I can finish putting my seatbelt on. Today, I turned the seat warmer on to keep my precious cargo from getting cold and tried to ignore the hunger.

Because hey, why not? Anybody who says they don’t like Taco Bell is either lying or wrong. Plus, I still had time to kill until Adelita’s was ready, and the unprintable story that the drive-thru attendant told me while I waited more than made up for the slight detour. That guy was living way mas than he should’ve been.

The restaurant was even busier than it had been during my initial visit, and I got a few jealous glares as I strolled past the line to pick up my order. Three restaurants down, three to go.

What would #nationaltacoday be without a trip to Federal Street? I knew I’d love Tacos y Salsas when I saw the big cooler full of Jarritos, a soda I’d loved since I was a kid. My brother and I would search the International Foods aisle in the grocery store for it – something about soda in a glass bottle, made with real sugar, pulled us in. Tacos y Salsas has the widest selection of flavors I’ve ever seen, and I bought a mango flavored one to distract myself from the four boxes of tacos now sitting in the car next to me.

The Jarritos stopgap solution didn’t hold for very long. By the time I walked into La Calle Taqueria y Carnitas, located on Alameda Ave, I was starving. I ordered their “best, most popular taco,” and left for my final stop. They didn’t serve individual tacos at Carnitas California – their menu suggested I order four. I’d have ordered a hundred if they’d suggested it, and I would’ve thought I could eat them all. Instead, I took my four carnitas tacos and booked it back to the Garlic studio.

90 minutes after leaving, I made it back to the studio, tacos in tow. Like nearly everything else in the world, tacos taste better when they’re earned. Today was no exception. 6 restaurants, 12.7 miles, approximately 27 stoplights, and too much roadwork – that’s the price I paid. The reward – #nationaltacoday – was more than worth it.